After starting life as a fan dipole, my home antenna was later converted into a single 40m dipole due to unwanted interaction between the bands (at the time 40/30m).  Recently, the need to operate multiple bands made me reconsider my options.

This weekend I added additional elements for 17m (18 MHz).  I thought I’d try a WARC band as it’s both contest free and a band I have little experience with.  I’ve not noticed any de-tuning of the main 40m elements and both bands perform very well indeed. 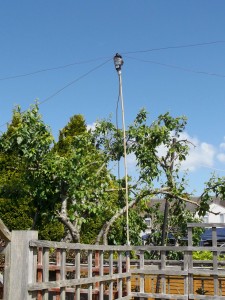 I sometimes have trouble explaining just how simple the antenna is on air, so thought I’d post some photos here.  The fan dipole now consists of 40m (horizontal) and 17m (inverted V) elements, supported at the centre and far end by 9ft bamboo canes; The near end is supported via fishing line to an upstairs window.  I used a low loss coax feed (aircell 5) from shack to dipole centre, which feeds the elements (solid copper) via Comet CBL-1000 (click for review).

Total height at peak is aprox 5m (16ft?), so practically NVIS; fantastic for inter-G but useless for DX due to the high angle of radiation.  Reports on both bands are very good indeed.  You can’t beat resonant antennas!  Obviously no ATU needed, although an ATU can be used to operate on 15m (21MHz) and possibly 6m (50MHz) which are the odd multiples of 7/18MHz. 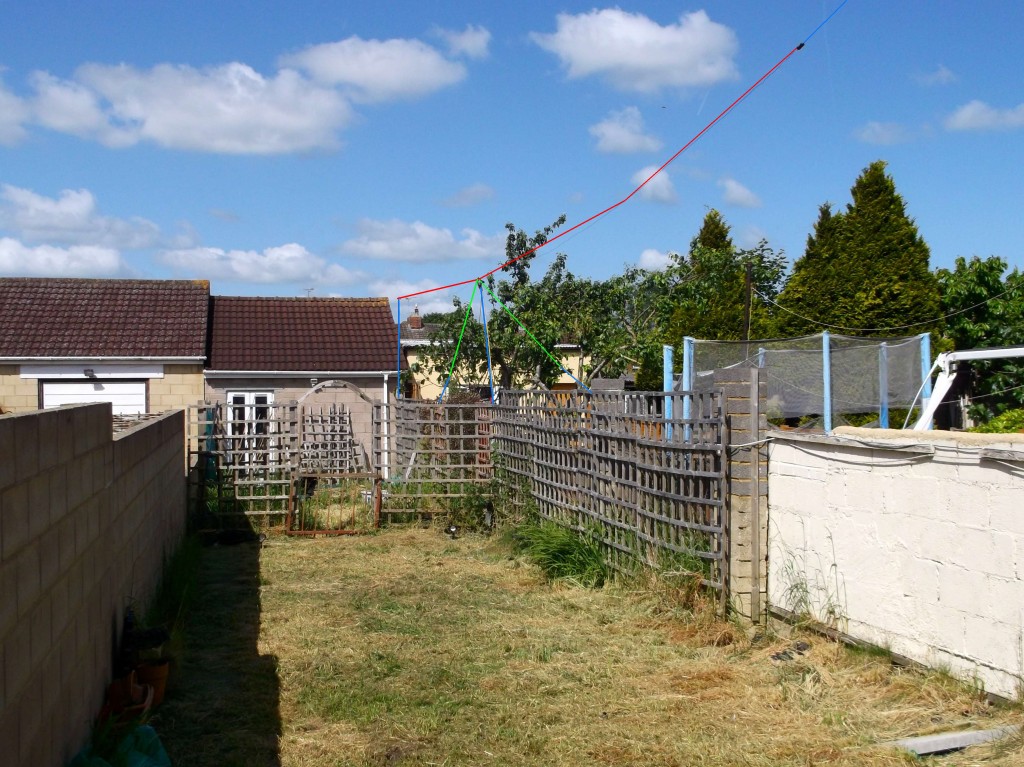 Despite using bamboo canes which will need regular replacement, the antenna has now been up 6 months without issues, surviving several storms.  The bamboo canes, copper wire and fishing line blend in with the environment so are hard to spot; very neighbour friendly!

Update: The fan dipole has now been up over a year with no bamboo casualties, even surviving the storms.

This entry was posted in Uncategorized and tagged antenna, dipole, fan, garden, NVIS. Bookmark the permalink.