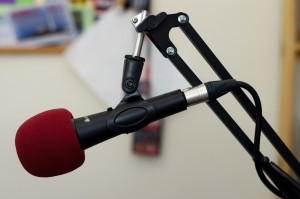 Some time ago I started receiving reports that the audio on my FT847 was very narrow. After much investigation and eventually swapping mics with my FT817 I realised it was the mic that was faulty. Oddly, swapping the mic element for another also failed to rectify the problem; the capacitor, resistor and switch in the mic tone control all checked out OK too.

With none of the above making much sense I decided to use the FT817 mic as a temporary solution whilst considering long term upgrades.  I thought of this as an opportunity to upgrade to outboard gear; a decent mic, preamp, compressor, gate and possibly EQ. However, after reviewing my options, the cost and possible problems converting line level output back down to mic level – I decided I should perhaps start with the basics. 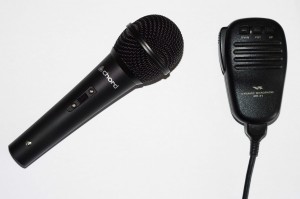 I ordered a cheap Chord ‘karaoke’ microphone (£10), desk stand (£10) and foam pop shield (£1) from eBay.  I then added a discounted latching foot switch from Maplin (reduced to £10) and wired some 1/4 jack sockets to the FT847 mic connector; one for the mic, one for the PTT.

Initial reports have been positive, although testing TX audio via Hack Green I think I may need some carrier adjustment. The Yaesu MH-31 does sound quite narrow whereas the studio mic audio has significantly more bass. Personally, whilst I agree the studio mic sounds ‘better’, some carrier adjustment would likely reduce the bass and reach a happy balance between fidelity and clarity. 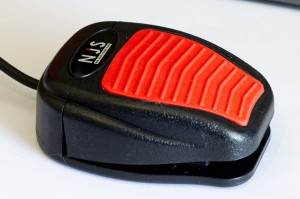 I’ll attempt to record some samples of the audio from both microphones once I have the carrier adjusted to the optimum level for both mics.

Update: I’ve been running with this setup for several months now and continue to get unsolicited fantastic audio reports.