These issues ruled out my ‘go-to’ antennas; fan dipoles and verticals.  Not sure how to proceed, I visited the Makerspace armed with an FT817, a short loaded 40m vertical, some random lengths of wire and an LDG auto ATU.

Running WSPR (~2W) resulted in many spots on several bands all around Europe. This gave me hope 🙂

The Makerspace is approximately 10 metre square, with a sloping roof.  I considered folded dipoles and loops but both have their limitations (single band antenna or very high Q).  A doublet seemed a potential solution but the highest path in the roof space is only 10m long, too short for anything below 20m (14MHz). 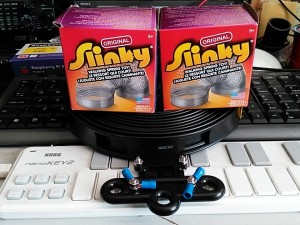 I’d previously read several articles (eHam, RadCom) regarding the use of Slinkys as antennas. Further research showed a single slinky can stretch to ~5m in length and contains ~20m of coiled wire. To make this a multiband antenna I figured I could feed with twin-feed (aka ladder line) connected to a balanced ATU. 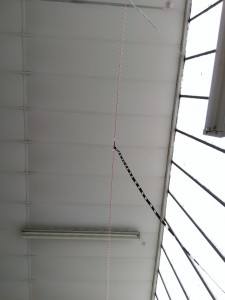 Say hello to the Makerspace Slinkyantenna!

Supported with nylon rope and with slinky’s extended to almost touch the walls.  It’s a compromise on several levels but initial tests (FT817, LDG ATU, DIY balun) suggest it’s usable on most bands >= 40m (7MHz).  Initial frustrations when Gergana LZ1ZYL (Bulgaria) couldn’t hear us were later explained when the other stations calling mentioned the power they were using.  When our ~2W QRP signal was finally heard, an S8 report was received and details exchanged without issue (she was S9+10, running significantly more power). 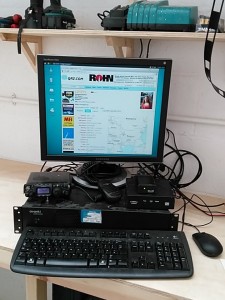 We plan to kit out the space with a balanced manual ATU and a 100W transceiver.  The station will be available for use by licensed members on a 24×7 basis.

Our long term aim is to recruit other full license holders and ultimately request a dedicated Swindon MakerSpace club callsign.

Interested in joining the Makerspace?  Have a solid state HF radio you may be willing to part with? Please get in touch :o)

What is Swindon Makerspace? 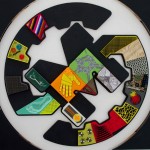