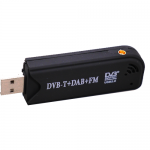 Some time ago I purchased an RTL ‘TV’ USB tuner. I was immediately impressed by the way whole chunks of the RF spectrum are visualised; tuning as simple as clicking a signal of interest plus ‘brick wall’ filters by the drag of the mouse. However, the novelty did soon wear off due to the lack of HF coverage. 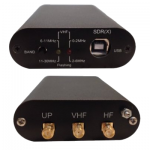 When a colleague (Graham G6IXM) offered me an SDR(X) I jumped at the chance to have a play.  This interface is based on the RTL but contains an upconverter plus pre-filters, covering 0-1850MHz. Performance was really very good indeed and I had hours of fun playing with this under both GQRX and GnuRadio (Linux).  However, is still lacked something: TX.

Spurred on by the incredible performance of the SDR(X) but not wanting to get too spendy, I researched a few of the lower end SDRs available.  Whilst there’s been several recent developments, the SoftRock RXTX Ensemble seemed highly respected and has been available long enough to develop a good user base.

A few emails to Tony KB9YIG later and I had a built SoftRock RXTX crossing the pond to the UK.  I did consider a kit but seeing the complexity (and size of the SMDs) I thought better of this.  Attempting to keep costs down I purchased a cheap eBay USB soundcard (48KHz only) – figuring I can always upgrade later if I wish.  In order to re-use my existing shack mic, I also ordered a £10 XLR-USB cable (a mic cable including pre-amp and sound card). 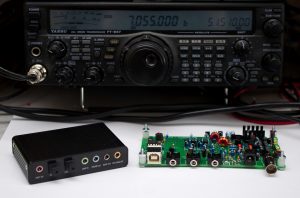 The $89 SoftRock and USB Soundacrd

I decided to go with Windows first as despite being a Linux person, there seemed to be a few potential ‘gotchas’ and I was keen to play, not fight configuration issues. On initial startup (HDSDR) I noticed I could only see the LO signal.  A post to the SoftRock group later and I soon realised I’d connected the wrong SoftRock ‘out’ to the wrong soundcard connector.  Feeling a complete numpty, swapping cables made 40m spring into life.

The bands the last two days have been appalling so I’ve not had a single QSO; although sending CQ in CW on 40m did net a couple of spots on the Reverse Beacon Network (Wales and Germany).  It lives!  What a fantastic bit of kit it is, too!

Spotted via the Reverse Beacon Network 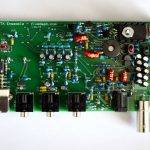 The SoftRock RXTX Ensemble is available from Tony KB9YIG via http://fivedash.com/ in both kit ($89) and pre-built ($124) form.  The device is supplied with an external LPF which must be built before using TX. Output power is stated as 1W but using my power meter and a dummy load, I measure 3W on CW keydown (40m). Build quality is absolutely superb and I found Tony incredibly helpful.  As expected, I had VAT and a handling fee to pay before collection in the UK but this IMO is still tremendous value. 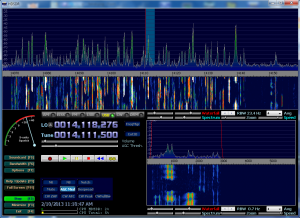 When band conditions improve I can see the SoftRock RXTX Ensemble rapidly becoming my radio of choice.  Whilst I love my FT847, this has opened my eyes to a whole new way of operating.  I fear there’s no way back.  I’m addicted.

Huge thanks to Tony KB9YIG for making this not only possible, but affordable.

This entry was posted in Uncategorized and tagged HDSDR, qrp, RXTX, SDR, SoftRock. Bookmark the permalink.