My previous experiences with HF mobile antennas have not been so great.  On a previous car a pro-am/hamstick mounted on the boot required bonding of the boot to car body with copper in order to ensure a good enough ‘ground’; removing paint and welding copper braid to metal on a nearly-new Mercedes was not my idea of fun (but of course, radio wins – so I did it regardless!). 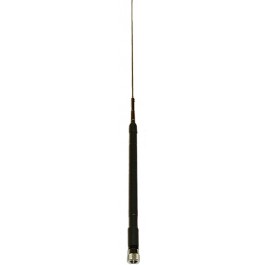 On my current vehicle I decided to use a mag mount.  Only, the 40m ham-stick I already had caused too much wind resistance, resulting in the mag mount becoming a missile with an unhealthy attraction to the rear window when travelling over 30mph.

In order to add further compromise to an already compromised solution, I ordered an Atom 40S from Moonraker.  This was the only ‘shortened’ 40m mobile antenna I could find.  Due to the short length (1.6m?) and base loading I wasn’t expecting much more than a dummy load on 40m.

The result?  Whilst mobile on my commute between Swindon and Knutsford (20m South of Manchester) I had constant QSOs on 40m.  I joined a net on 7.180 and talked the entire journey with great reports both ways from all stations.  Sure, I expect I was an S point down compared to my hamstick which itself is probably a couple (or more?) S points down in comparison to a full size antenna.  However, with 100W from an Icom 706 (possibly at a guess 10W ERP after antenna losses?) I wasn’t struggling to make contacts.

As the band closed to inter-G I finished the journey with QSOs into the Netherlands, also with great reports.

Due to the shortened size of the Atom 40S the SWR does climb steeply either side of the resonant frequency. I adjusted for 7.15 MHz and find it usable (SWR < 2:1) between 7.1 and 7.2 MHz.

Overall, I’m impressed.  My only criticism would be the grub screws which appear to be made from butter.  From the factory one loosened without issue.  The other required substantial swearing, application of heat (discolouring the chrome as a result) and several attempts at packing the grub screw with foil in order to gain any sort of grip on the now rounded cavity.  If this wasn’t a bank holiday weekend I’d have probably just called Moonraker and asked for a replacement!

The specifications from Moonraker are as follows:-

I’m not linked with Moonraker in any way but a (mostly) happy customer.  The Atom 40S far exceeded my expectations and for < £30 has given me the ability to operate mobile on 40m.

I hope to perform some a/b tests between the Atom 40S and a traditional pro-am/hamstick.  This post will later be updated with results.